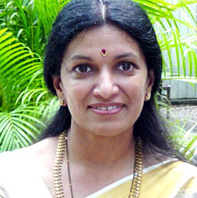 Back To Author ListView My Articles

A critical thinker, writer and an introspective spiritualist, with particular interest in the religious education of children and youth, Nandita Shankar has been quite active in furthering the cause of Hinduism. Her greatest contribution to the history of Hinduism in the west is the conception and founding of the official Annual Hindu Heritage Month (HHM) in February, which has now completed ten years.

Well read and well rooted in several systems, including Kashmir Shaivism, her articles have appeared in various journals like Koshur Samachar, Kasheer, Sanatana Sandesh, Anjali, etc. Her main area of interest is removing misconceptions about Hinduism, and guiding teachers and parents, in this regard.

A practicing neurologist, she lives in Florida, with her husband and college going children, and spends her spare time writing/editing articles on spirituality, conducting local satsangs/study groups, interfaith dialogues and discussions on Neuro-theology.

One of the early signs of schizophrenia is a constant state of confusion. This is then reinforced by sudden changes in behavior and personality. Read more

It got Romanized [Latin alphabets] in 18th century. This language has precision in thought and content and is metaphysical too. Read more

Useful Tips Can Bolster Your Wellness

Unhealthy diets pose a greater risk to morbidity and mortality than does alcohol, drugs and tobacco use combined. Read more

Roganjosh is a main dish on any occasion from informal invitation to formal occasions like weddings. Read more

Fish is an important Kashmiri delicacy usually cooked on religious occasions like 'Gaada Bata' in the month of December, Read more

One of the most beautiful country in the world, the landscape in this island nation is simply inspiring with lush green fields, snow peaked mountains, lakes, rivers, streams Read more

The Lamp of the Dharma Kshetra

What prompts you to be Dhananjaya ----the Arjuna of Mahabharata? Read more

The Harmonius Journey of a Musical Family

The real occupier is Pakistan which has occupied the north west part of Kashmir which belongs to India. Read more

Mahatma Gandi Dharma Seva Award is bestowed upon those individuals who have worked tirelessly and selflessly for the greater good of Sanatana Dharma and the Dharmic community. Read more